Got to view the exhibition at Paragon Shopping Centre set up by the Hour Glass .

Pictures of my new M53

Got it on Monday.  Its a great watch for its value and its already starting to patina.  I plan to let it go naturally. 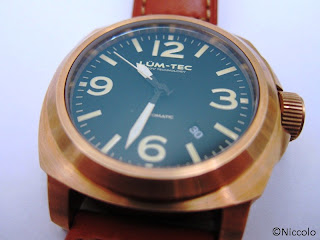 Wait is nearly over!

I  managed to acquire this piece from a friend who I am very thankful to for allowing me to purchase it.  It is a Seiko released along with 3 others to celebrate 100 years of watch making.  Its official model number is SRP455K.

I have been bitten by the Seiko Bug

I have heard great things about Seiko coming from seasoned and knowledgeable watch collectors.

I am hoping to get my first one a limited edition Monster.  A few friends of mine have gotten this piece and I am hoping I can get my hands on one at retail price with discount.  Seems to be a few dealers trying to sell it with an inflated price

I love Panerai and its watches but I always have one problem with some of their releases.  Their watches are nice but sometimes lack in execution of certain features.

Take their latest release for instance

Panerai has just released their newest movement the P5000.  It is a manual winding movement with 8 days power reserve.  The 510 and 511 are the models which feature this new movement.  The 510 is in stainless steel and the 511 is in rose gold.  It has been known for sometime but finally released to the general public.

The thing I don't understand is why a Power Reserve indicator was not included.  A power reserve indicator is useful especially for a 8 days movement because it gives the wearer an indication of when the watch needs to be wound again.

Panerai have gone down this road previous with the limited edition 339.  It can be argued no PR indicator was included because it had a cool composite case and it would ruin the aesthetic beauty of the watch overall.

Time will tell if a P5001 movement will be released just like P3001 movement which has a PR indicator on the back.

Have been busy with Uni assignments and exams which are finally done for the semester.  Still waiting on my Bronzo.  The waiting game continues with that.

I didn't post on my blog that I dropped my Panerai 8 feet down the stairs and screwed the movement.  Luckily that was the end of the problems and it got sent off for repair.  Its fixed and I need to collect it.  It has been missed and I am looking forward to getting it back on my wrist.

Nick
In my 20s, a Student, Love Watches, Football aka Soccer, Food, Music and Reading